Thread veins are tiny blood vessels which run close to the surface of the skin and look like fine red, or sometimes purple, wiggly lines. They’re also sometimes called ‘spider veins’ or ‘broken veins’, although the veins aren’t in fact broken but only slightly enlarged. The medical term for them is telangiectasia. 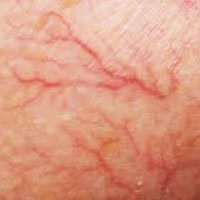 Usually there’s no obvious cause. Thread veins tend to develop as we age and our skin and blood vessels become less elastic. Hormonal changes associated with pregnancy and the menopause are thought to provoke their development – the reason why women are more prone to them than men.

You can also inherit a family tendency to the problem. Other causes include too much sunbathing, exposure to wind or extreme temperatures, cortico-steroid medicines and radiotherapy. Jobs that involve prolonged standing may aggravate the condition, but they don’t actually cause it. Although you may not like the look of them, thread veins aren’t dangerous, but they tend to become larger and increase in number over time.

Nearly all of us get them as we age, apparently. Around one in five women in their 20s have thread veins, a figure that rises to around half by the age of forty and continues to increase. By the age of 70 over 70 per cent of women have some thread veins.

Treatment starts from as little as £45

To ensure your skin is suitable and there will be no adverse reaction it is necessary to have a patch test, before the treatment begins. At the present time ANITA is offering a FREE patch test. So why not arrange to come along and get your FREE patch test If at this stage you decide to go ahead we will ask for £20 deposit which will be fully refundable at your final treatment.

Any cookies that may not be particularly necessary for the website to function and is used specifically to collect user personal data via analytics, ads, other embedded contents are termed as non-necessary cookies. It is mandatory to procure user consent prior to running these cookies on your website.